ANTS
Ants are called "social insects",
but when they take over my bag of cheese puffs that's too damn social. 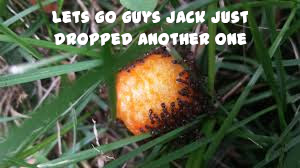 They are fast, and too small to get a good look at,
but I think they may be driving little cars.
When I first started killing them I had too much empathy.
I put myself in the ant's place.
I'm innocently driving around on this huge white sink,
and this big thing comes out of nowhere
and squishes the guy right in front of me.
I can see the story in the ant newspaper:
"LOCAL ANT MURDERED ON SINK!
Witness claims a giant thumb came down from the sky!
Ant police are trying to figure out what a 'thumb' is."
Now I'm more callous about killing the little wankers.
I wipe them out in large groups, laughing like Vincent Price.
I pay the rent here, buddy!
Last night I thought they were on my monitor screen,
but after repeated efforts to clear the screen,
I realized that they were running around on my reading glasses.
When we use bug spray they come right back with new troops,
while we're still trying to cough up Linda Blair.
I've learned that Lysol spray kills them
and doesn't kill us.
I went into the bathroom to brush my teeth.
and when I set my toothbrush on the sink
a herd of them rushed for it.
I grabbed up the toothbrush, shouting "AHA!",
and sprayed them all with Lysol.
All except one.
The surprised survivor drove around in frantic circles,
thinking he was the next victim.
My finger was poised to spray him, but I stopped.
Before I let him go I smiled and said to the ant:
"Tell your friends."
Jack Blanchard