back when I was a cub reporter.

It's about The Walt Disney World groundbreaking,
The truth can be funny. 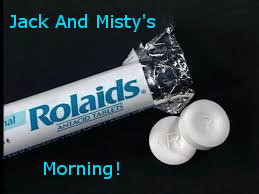 At 8:37 AM I remembered why I stopped getting up early,
when stomachs growl,
and the breath of man strikes fear into the hearts of moose.


The Parkwood Plaza Cinema was packed with press people,
snapping pictures and interviewing the crap out of each other.

At the Disney Groundbreaking Press Conference
I thought there would be mice and ducks,
but not an animal spoke, and not a magic wand waved.
The affair proceeded with the hilarity of a colonoscopy in the rain.

One by one, executives confessed to excitement,
undetectable to the human eye.
The audience reacted with a burst of apathy.

There were speeches
about hydro-pneumatic modular electromagnetic prefabrication,
followed, two or three days later, by a spirited race to the rest rooms.
I think Scrooge McDuck is running the company.


We stood in awe of cardboard models
hovered over by cardboard dignitaries,
while cameramen kneeled and stretched in their native dance.


News people rattled off reporter lingo into phones,
scooping each other.
I was amazed to see many of them typing.
I do all my writing with a brown crayon.


Buses carried us to a two-hour presentation of mud,
where holes were being dug on Disney swampland.
Balloons represented future hotels
which were the project's main theme.


Then back to the buses for another ride.
I awoke with a start when the bus door opened,
thinking we had reached Cincinnati,
only to find us at a Ramada Inn.
I checked my watch.
It had rusted to a stop.

A nice lunch of Chicken Formica awaited us poolside.
There was no shade,
so we ate, glowered, and watched each other burn,
to the music of a sweating Latin band.


I was in such pitiful shape
that when I got home my dog tried to bite me.
The family asked me how it went.
"Disney magic was all around", I said.
"The entire day was one of beauty and song."
Jack Blanchard