A Short Story with a Lead Up
To a Great Singer Songwriter!


It was not too Long Ago, Oh Yeh, actually it was,
when I was sprouting into my teenage Years.
As many feel Their Teen Years and Their Era was the best, so do I.
The TV Shows, Blockbuster Movies,
The Space Age and of course The Music,
EG: Street Corner Groups, Rock Groups, British Invasion,
Counter Invasion Homegrown Rock Groups,
Country & Folk Singers & Groups, Country Rock and
many Individual Singer Songwriters.
As far as Music went there probably weren't many days
that you would go out your door meet up with Friends
and say "Hey, did you hear that new song By So&So".
Being on a limited budget it was rough keeping up a collection.
Luckily as many probably did, was share the costs
with Siblings as I did and then down the road
We would fight whose 45' or LP's belonged to whom!
Actually just the other day my brother and I were doing it
again some 50 or more Years later on the phone
after discussing Our ailments and medications, HaHaHa!

We also had our bad and sad times,
Our losses in the Vietnam War, A Nuclear Standoff with the USSR,
doing Civil Defense Drills in School and The Loss of our
President JFK and many other great people.

But in that Mix of Good and Bad and Screen and Song,
Spawned off some good Memories, Movies, Music and Shows.
Oh yeh The "Secret Agent" !
We couldn't get enough of them.
James Bond and then all the TV Secret Agents.
I believe one of the first ones in my childhood was
"Danger Man/Secret Agent Man (1960 - 1968)".
We all know that Theme Song but while many know the song
and who sang it we didn't know too much about the Man himself,
that Man is Johnny Rivers. 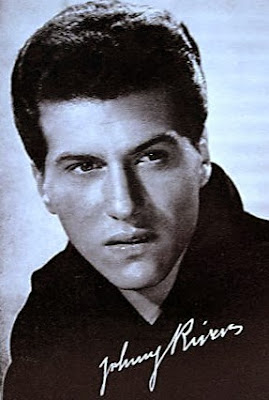 On June 12, 2009, Johnny Rivers was inducted into the
Louisiana Music Hall of Fame.


His name has been suggested many times for induction into the
Rock and Roll Hall of Fame, but he has never been selected,
yeh we have heard of the politics there.


Rivers however, was a nominee for 2015 induction into
America's Pop Music Hall of Fame.

Many including myself just thought of Johnny as some
Southern Guy with a Guitar.
But actually Rivers was born November 7th, 1942
as John Henry Ramistellain New York City, actually I think
I read Brooklyn but not sure and He is of Italian ancestry.
His family moved from New York to Baton Rouge, Louisiana.
Influenced by the distinctive Louisiana musical style,
Rivers began playing guitar at age eight,
taught by his Father and Uncle.
While still in junior high school, he started sitting in with a
Band called the Rockets, led by Dick Holler,
who later wrote a number of hit songs, including
"Abraham, Martin and John" and a novelty song,


"Snoopy vs. the Red Baron"


We all know and remember those songs!


"I didn't know He did that song"
and enjoying some more of those great songs!


BTW Johnny is still going strong!
You can find out more about Johnny and His Music at http://johnnyrivers.com/jr/index.php