Daylight Savings Time Ends This Weekend - What is it? How did it start? When do we set our clocks back?


WHEN IS DAYLIGHT SAVING TIME 2018?
WHY DO WE CHANGE OUR CLOCKS? DST DATES & HISTORY 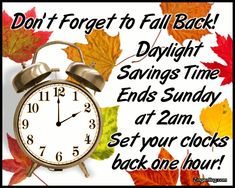 The Old Farmer’s Almanac (around since the beginning of time or, at least, Benjamin Franklin’s day) answers your frequent questions …
WHAT IS DAYLIGHT SAVING TIME?
Daylight Saving Time (DST) is the practice of moving the clocks forward one hour from Standard Time for the summer months, and changing them back again in the fall. The general idea is that this allows us all to make better use of natural daylight. However, DST has many detractors.

Note that the term is “Daylight Saving Time” and not “Daylight Savings Time” with an “s” at the end of “Saving.” (The word “saving” is singular because it acts as part of an adjective rather than a verb.)

WHEN IS DAYLIGHT SAVING TIME 2018?
To remember which way to set their clocks, folks often use the expression, “Spring forward, fall back.”

Note: Since the time changes at 2:00 A.M., we generally change our clocks at Saturday bedtime.

THE HISTORY OF DAYLIGHT SAVING TIME

Does changing the clocks really provide benefits? We’ll let you be the judge.

BLAME BEN?
Benjamin Franklin’s “An Economical Project,” written in 1784, is the earliest known proposal to “save” daylight. It was whimsical in tone, advocating laws to compel citizens to rise at the crack of dawn to save the expense of candlelight:

“Every morning, as soon as the Sun rises, let all the bells in every church be set ringing: and if that is not sufficient, let cannon be fired in every street to wake the sluggards effectually… . Oblige a man to rise at four in the morning, and it is probable that he will go willingly to bed at eight in the evening.”

DST’S TRUE FOUNDER?
The first true proponent of Daylight Saving Time was an Englishman named William Willet. A London builder, he conceived the idea while riding his horse early one morning in 1907. He noticed that the shutters of houses were tightly closed even though the Sun had risen. In “The Waste of Daylight,” the manifesto of his personal light-saving campaign, Willet wrote, “Everyone appreciates the long, light evenings. Everyone laments their shrinkage as the days grow shorter; and nearly everyone has given utterance to a regret that the nearly clear, bright light of an early morning during Spring and Summer months is so seldom seen or used… . That so many as 210 hours of daylight are, to all intents and purposes, wasted every year is a defect in our civilization. Let England recognise and remedy it.”

Willet spent a small fortune lobbying businessmen, members of Parliament, and the U.S. Congress to put clocks ahead 20 minutes on each of the four Sundays in April, and reverse the process on consecutive Sundays in September. But his proposal was met mostly with ridicule. One community opposed it on moral grounds, calling the practice the sin of “lying” about true time.

WORLD WAR I LED TO ADOPTION OF DST
Attitudes changed after World War I broke out. The government and citizenry recognized the need to conserve coal used for heating homes. The Germans were the first to officially adopt the light-extending system in 1915, as a fuel-saving measure during World War I. This led to the introduction in 1916 of British Summer Time: From May 21 to October 1, clocks in Britain were put an hour ahead.

The United States followed in 1918, when Congress passed the Standard Time Act, which established the time zones. However, this was amidst great public opposition. A U.S. government Congressional Committee was formed to investigate the benefits of Daylight Saving Time. Many Americans viewed the practice as an absurd attempt to make late sleepers get up early. Others thought that it was unnatural to follow “clock time” instead of “Sun time.” A columnist in the Saturday Evening Postoffered this alternative: “Why not ‘save summer’ by having June begin at the end of February?”

The matter took on new meaning in April 1917, when President Woodrow Wilson declared war. Suddenly, energy conservation was of paramount importance, and several efforts were launched to enlist public support for changing the clocks. A group called the National Daylight Saving Convention distributed postcards showing Uncle Sam holding a garden hoe and rifle, turning back the hands of a huge pocket watch. Voters were asked to sign and mail to their congressman postcards that declared, “If I have more daylight, I can work longer for my country. We need every hour of light.” Manhattan’s borough president testified to Congress that the extra hour of light would be a boon to home gardening, and therefore increase the Allies’ food supply. Posters chided, “Uncle Sam, your enemies have been up and are at work in the extra hour of daylight—when will YOU wake up?”

With public opinion in its favor, Congress officially declared that all clocks would be moved ahead one hour at 2:00 A.M. on March 31, 1918. (Canada adopted a similar policy later the same year.) Americans were encouraged to turn off their lights and go to bed earlier than they normally did—at around 8:00 P.M.

FARMERS DID NOT FAVOR DST
Many Americans wrongly point to farmers as the driving force behind Daylight Saving Time. In fact, farmers were its strongest opponents and, as a group, stubbornly resisted the change from the beginning.

When the war was over, the farmers and working-class people who had held their tongues began to speak out. They demanded an end to Daylight Saving Time, claiming that it benefited only office workers and the leisure class. The controversy put a spotlight on the growing gap between rural and urban dwellers. As a writer for the Literary Digest put it, “The farmer objects to doing his early chores in the dark merely so that his city brother, who is sound asleep at the time, may enjoy a daylight motor ride at eight in the evening.”

DST RETURNS
The subject did not come up again until after the attack on Pearl Harbor, on December 7, 1941, and the United States was once again at war.

During World War II, Daylight Saving Time was imposed once again (this time year-round) to save fuel. Clocks were set one hour ahead to save energy.

After the war (which concluded with Japan’s final surrender on September 2, 1945), Daylight Saving Time started being used on and off in different states, beginning and ending on days of their choosing.

LOCAL DIFFERENCES AND INCONSISTENCY
Inconsistent adherence to time zones among the states created considerable confusion with interstate bus and train service. To remedy the situation, Congress passed the Uniform Time Act in 1966, establishing consistent use of Daylight Saving Time within the United States: Clocks were to be set ahead one hour on the last Sunday in April and one hour back on the last Sunday in October.

That was the rule, but some state legislatures took exception via a loophole that had been built into the law. Residents of Hawaii and most of Arizona did not change their clocks. Residents of Indiana, which straddles the Eastern and Central time zones, were sharply divided on Daylight Saving Time: Some counties employed it, some did not.

In 1986, the U.S. Congress approved a bill to increase the period of Daylight Saving Time, moving the start to the first Sunday in April. The goal was to conserve oil used for generating electricity—an estimated 300,000 barrels annually. Still, some resistance remained:
In 1997, a bill was introduced to end Daylight Saving Time in Nevada.
In 2001, the California legislature requested that its state be allowed to enact Daylight Saving Time year-round in order to eliminate rolling blackouts caused by the electricity crisis in that state.
Neither of these proposed changes came to pass.

DAYLIGHT SAVING TIME TODAY
The current daylight saving period was established with the Energy Policy Act of 2005, which went into effect in 2007. As a result, most Americans now spring forward (turn clocks ahead and lose an hour) on the second Sunday in March (at 2:00 A.M.) and fall back (turn clocks back and gain an hour) on the first Sunday in November (at 2:00 A.M.).

However, even today, farmers’ organizations lobby Congress against the practice, preferring early daylight to dry their fields and a Standard Time sunset for ending their work at a reasonable hour. Some farmers point out that the Daylight Saving Time is deceptively misnamed. “It is a gimmick that changes the relationship between ‘Sun’ time and ‘clock’ time but saves neither time nor daylight,” says Katherine Dutro, spokesperson for the Indiana Farm Bureau.

Most of Canada is on Daylight Saving Time; only portions of Saskatchewan and small pockets of British Columbia remain on Standard Time year-round. However, the practice has its detractors. In the words of a current-day Canadian poultry producer, “The chickens do not adapt to the changed clock until several weeks have gone by, so the first week of April and the last week of October are very frustrating for us.” Similarly, one Canadian researcher likened an increase in traffic accidents to the onset of Daylight Saving Time. Other experts insist that the extra hour of daylight reduces crime.