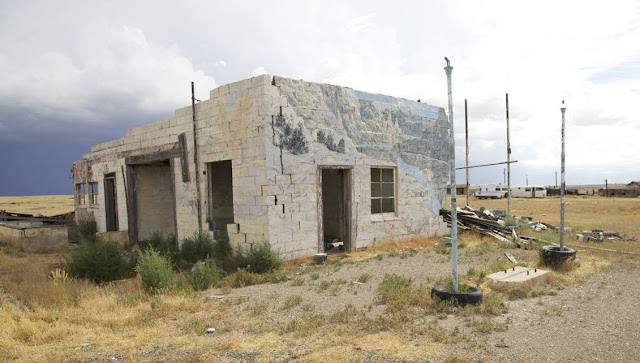 Cisco Clifton's Fillin' Station
Cisco, Utah
Cisco Clifton's Fillin' Station in Cisco, Utah
Oil Wells Cisco, UtahCisco is a ghost town in Utah near the junction of Utah SR-128 and Interstate 70. At one time the town served as a saloon and water refilling station for the Denver and Rio Grande Western Railroad. The town's demise came with the demise of the steam locomotive. The town site contains many relics of a typical old west railroad town. Unfortunately for history and railroad buffs the ghost town's easy access and faint visibility from the freeway have lured vandals; the relics are heavily damaged. The only modern structure is a pump station for a natural gas pipeline.
Cisco has a year round population of 4.

Mr. Harris used to work at Clifton’s Filling Station 10 miles up the road in Cisco. He pumped gas, fixed tires, did whatever needed to be done. He told us about how one day Johnny Cash pulled up. Mr. Cash and Mr. Harris had a little chat and then he filled up Cash’s car with $7 worth of gas. And then Cash wrote a song about it:
Cisco Clifton’s Filling Station (on Essential Johnny Cash 1955-83)

Cisco Clifton had a filling station about a mile and a half from town. Most cars passed unless they were out of gas so Cisco was always around.
Regular gas was all that he sold except for tobacco, matches, and oil. Other than that he fixed lots of flats keeping Cisco’s rough hands soiled.
He’d wipe the glass and check the air. And a hundred times a day he’d patiently give directions on how to get to the state highway.
Usually he’d give them water or a tire or two some air and once a big black Cadillac spent $7 there.
He’d give anybody anything they’d ask And lend anything he had. His tools or tires, bumper jacks or wires the good ones or the bad.
In winter time there was a deep coal stove and a table for the checker game. And every morning at sun up the same checker players came.
So Cisco Clifton’s filling station was always in the red. Personal loans were personally gone, but never a word was said.
One morning at 8 the checker players heard a big bulldozer roar like a freight. And Cisco said “I hope my kids stay fed when they build that interstate.”
He’d managed to pay for the property where his little filling station sat. And friends still came for the checker game so Cisco settled for that.
He wouldn’t say so, but Cisco knew the interstate was too much to fight. But to keep his will and pay his bills, he did odd jobs at night.
He still opened up at a sunrise and the checker game went on. The cars flew past on high-test gas, and the neighbors had sold out and gone.
If a car ever did go by, he was lost. And if they stopped they were treated the same.
So at Cisco Clifton’s filling station, there’s a howdy and a checker game.