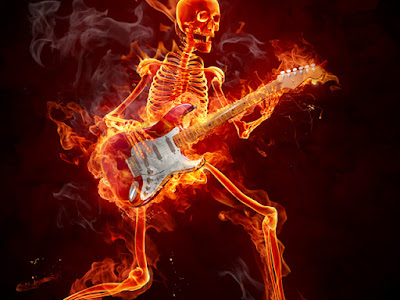 Post Animal have had the DIY scene in their hometown of Chicago under a spell since their formation in 2015, and now they're ready to further share their magic. The psych-rock ensemble have unveiled the eerie visual for their song "Tire Eyes," premiering through Billboard today, and things are about to get a little spooky.

As the visual opens, take caution not to stare too long at the swinging pendulum. This is just one of the many witchy acts spotted as the clip proceeds -- of course, included with intermittent moments of the Post Animal guys rocking out to their own rousing garage rock tune. Despite the song title, the members' "tire eyes" aren't often seen, as most of them spend the duration of the video in oversized sunglasses or obstructing face paint.


Complete with an ominous candlelit dinner, creepy uses of stuffed animals and ample fog, Post Animal's most recent visual offering shows their kooky, creative side, which is just as pleasingly evident in their music.

"We were deeply saddened when we saw how many stuffed animals were lying in a bin on top of each other at Goodwill. We decided to take them and create a hype video of a sacred journey where five guys unleash their ancient auras trapped within," the band says of the clip.

"Tire Eyes" comes from Post Animal's debut full-length, When I Think Of You In a Castle, released April 20. The band is in the midst of a national headlining tour that will take them back home just in time to play Lollapalooza in August. They play the Bootleg Theater in Los Angeles tonight (June 15).