It's been another rough year full of celebrity deaths that have hit music fans really hard. And once again, British artist Chris Barker has taken his grief and turned it into something beautiful: another re-imagining of the Beatles' iconic Sgt. Pepper's Lonely Hearts Club Band album cover, made up of images of the dearly departed.
Last year, Barker honored the heartbreaking list of the passed, which included David Bowie, Prince, Leonard Cohen, Alan Rickman, Glenn Frey, Sir George Martin and Gene Wilder among many others.
The art director at a British publication returned on Monday (Nov. 6) with his latest effort, which mixes in the usual assortment of faces that will be familiar to British pop culture fanatics as well as global stars including: Gord Downie of The Tragically Hip, Happy Days star Erin Moran, Mary Tyler Moore, Robert Guillaume, Bill Paxton, Fats Domino, Sam Shepard, Al Jarreau, Don Rickles, Night of the Living Dead director George A. Romero, Linkin Park singer Chester Bennington, Martin Landau, Charlie Murphy, Jerry Lewis, Hugh Hefner, Harry Dean Stanton, Chuck Berry, original Batman star Adam West, Tom Petty, John Hurt, Roger Moore, Soundgarden singer Chris Cornell and Glen Campbell.
"Last year I was surprised at the amount of attention my Sgt. Pepper montage of all the big names we had lost received in the media," Barker tells Billboard. "Millions of retweets, articles online, newspapers, magazines, radio, TV, at home and around the world. It genuinely got to the point where I wouldn’t have been surprised to see someone getting it as a tattoo. But looking back it was a truly strange year. It wasn’t just the number of celebrities dying, it was the level of genius of so many of them. A Bowie or a Prince only comes around once a generation and we’d lost both of them, let alone George Michael or Carrie Fisher. Fate was dealing us a very odd hand. It felt like the last exodus of genius from the planet. So it’s not surprising that became the big story of the year." 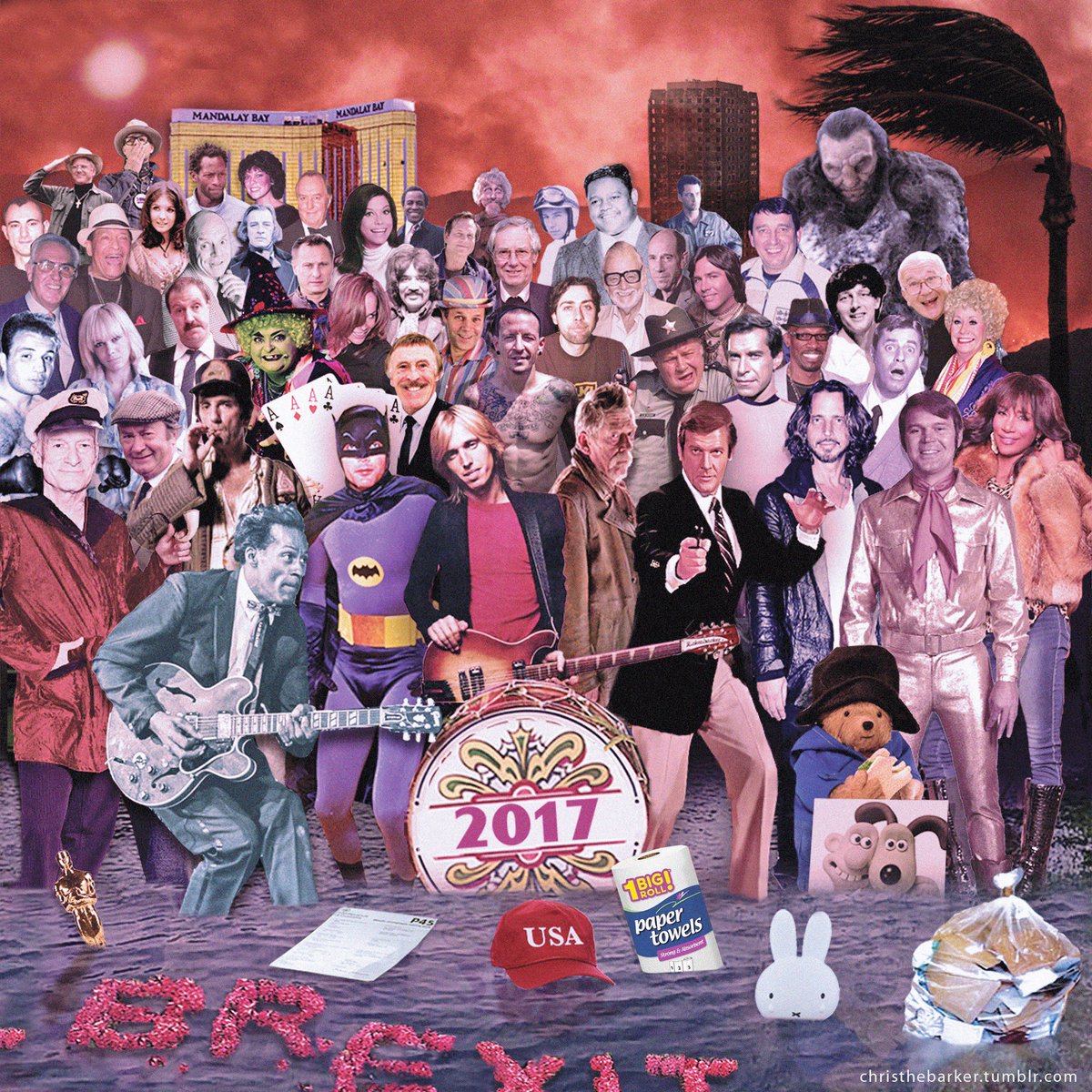 Barker says he appreciated the public attention to his project, even though he decided to stay away from a command performance, choosing instead to use his increased online profile to make comments about the state of the world via his #faketoys series, which took on British and American political figures including Steve Bannon, Kellyanne Conway and Sean Spicer.
"But I never intended to do another Sgt. Pepper montage," he says. "I had done that. And this year wasn’t like last year. Sure, a lot of famous people had died but, to a certain degree, they weren’t world-changers. You could argue that Fats Domino and Chuck Berry changed the world and maybe a few others, but generally speaking these are all just good people who are good at their jobs and happened to get a lucky break. The story wasn’t the same as last year, so it would be pointless to try and replicate it. I didn’t want me doing a dead celebrity montage to become a sign that the end of the year was approaching, like the Coca Cola trucks or something."
But, he started thinking, it was another monumental year, and maybe a dead celebrity montage could tell "another story." He thinks the final image achieves that without further commentary, thanks to subtle touches that include the Mandalay Bay hotel in the background as a reminder of the Route 91 Harvest Festival mass shooting, a tree whipped by winds in reference to this year's numerous deadly hurricanes, a roll of paper towels not unlike those Pres. Trump tossed gleefully at Puerto Rican hurricane sufferers and the word "Brexit" floating in the rising flood water. (He does, however, regret he was unable to include the "genuinely" genius late soul singer Charles Bradley).
"Is this going to become a regular thing now?" he wonders. "Well, if we don’t get a hold on climate change, hate crime, gun violence and world leaders threatening nuclear annihilation during their morning bowel movement, then we might not have too many more years, so it’s down to all of us really."
For completists, here's a list of all the other figures not yet mentioned in the image: Robert Miles, William Christopher​, Ugo Ehiogu, Robert Hardy, Geoffrey Bayldon, John Surtees, Graham Taylor, Neil Fingleton, William G Stewart, Deborah Watling, Trevor Martin, Michael Nyqvist, Peter Sarstedt, Barry Norman, Miguel Ferrer, Richard Hatch, Jake LaMotta, Anita Pallenberg, Gorden Kaye, Carol Lee Scott, Tara Palmer-Tomkinson, Bruce Forsyth, Sean Hughes, Clifton James, John Noakes, Roy Barraclough, Liz Dawn, Peter Sallis, Joni Sledge, Michael Bond, Dick Bruna and Gustav Metzger.