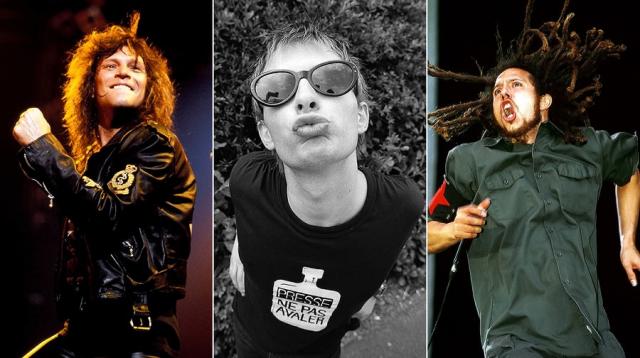 The nominations for the Rock and Roll Hall of Fame's Class of 2018 are in, and the list includes Radiohead, Rage Against The Machine, Bon Jovi, Depeche Mode, Judas Priest, Kate Bush, the Cars, Dire Straits, Eurythmics, J. Geils Band, LL Cool J, MC5, the Meters, the Moody Blues, Rufus featuring Chaka Khan, Nina Simone, Sister Rosetta Tharpe, Link Wray and the Zombies. The top vote-getters will be announced in December and inducted on April 14th at a ceremony at Public Hall in Cleveland. HBO will broadcast the ceremony later in the year.

To be eligible for this year's ballot, each nominee's first single or album had to be released in 1992 or earlier. Some of the nominees have appeared on previous ballots, but this is the first appearance for Kate Bush, Dire Straits, Eurythmics, Judas Priest, the Moody Blues, Radiohead, Rage Against The Machine, Nina Simone and Sister Rosetta Tharpe. Radiohead and Rage Against the Machine are the only acts to appear on the ballot in their first year of eligibility, while this marks the fifth appearance for the J. Geils Band, the fourth for LL Cool J and the Meters, the third for the Cars, MC5 and the Zombies and the second for Bon Jovi, Depeche Mode, Rufus featuring Chaka Khan and Link Wray.
For the sixth consecutive year, the public will have the opportunity to vote alongside the more than 800 artists, historians and music industry insiders of the Rock Hall voting body. From now until December 5th, fans can vote on the Rock Hall's site for the nominees they'd like to see inducted. The top five acts will comprise a "fan's ballot" that will count as one of the ballots that determine the class of 2016.
Keeping with a new tradition that began last year, the Hall of Fame has announced the individual members of each band that will be honored. The current Depeche Mode lineup of Dave Gahan, Martin Gore and Andy Fletcher is listed along with former keyboardist Alan Wilder (who left in 1995) and original keyboardist/band co-founder Vince Clarke, who after just one album and went on to form Yazoo and Erasure. Bon Jovi is listed along with former guitarist Richie Sambora (who left in 2013) and original bassist Alec John Such, who left in 1994.
Judas Priest has featured many lineups over the past five decades, but the Hall of Fame selected vocalist Rob Halford, bassist Ian Hill, guitarists Glenn Tipton and K.K. Downing and drummers Scott Travis, Les Binks and Dave Holland.
Dire Straits had an even wider assortment of musicians come and go over the years, but only frontman Mark Knopfler, bassist John Illsley, drummer Pick Withers, guitarist David Knopfler and keyboardists Alan Clark and Guy Fletcher appear on the ballot.
As always, the Rock and Roll Hall of Fame induction ceremony could feature some once-in-a-lifetime reunions. Rage Against The Machine haven't performed since 2011, though it's far from clear if reclusive frontman Zack de la Rocha would come to the event. "It'll be interesting to see who shows up," Rage bassist Tim Commerford told Rolling Stone in 2015. "I think it's pretty obvious. I think there's somebody who's going to show up and somebody who's not going to show up and maybe somebody who's going to show up with an enema filled with food coloring and shit all over the red carpet."
The ceremony could also mark the first Dire Straits performance since their 1995 split, Bon Jovi's first public appearance with Richie Sambora since their acrimonious split in 2013 and the Cars' first performance since their brief 2011 reunion tour. It could also be the first time that Vince Clarke has taken the stage with Depeche Mode since he left in 1981. It's also a very rare opportunity for Kate Bush to perform live in America.
Earlier this year, Rolling Stone asked each member of Radiohead for their thoughts on the Rock and Roll Hall of Fame. Most of them expressed supreme disinterest in the event. "I don't want to be rude about the Rock and Roll Hall of Fame because for a lot of people it means something, but culturally I don't understand it," said guitarist Ed O'Brien. "But if you ask me what I'd rather be doing that night, I'd rather be sitting at home in front of the fire or going to a gig."
Only bassist Colin Greenwood seemed enthused about the prospect of the band getting in. "I'd be grateful if we got in," he said. "Look at the other people that have been inducted. I don't know if everyone else will go though. It might be me just doing bass versions of everything like, 'Come on, you know this one!' I'd have to play the bass part to 'Creep' five times."
Last year's Hall of Fame class included Pearl Jam, Yes, Journey, Tupac Shakur, Joan Baez and Electric Light Orchestra.
Posted by Unknown at 1:28:00 PM