Breaking News; "The effect of the national anthem demonstration,,," (A short but good read)

Jaguars apologize to military for protest during anthem in London 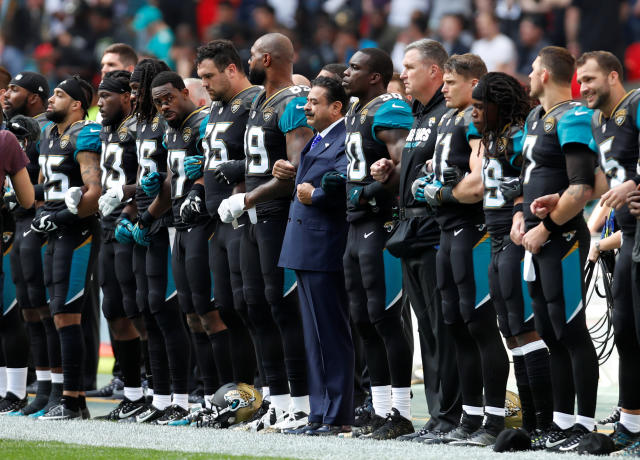 Jaguars owner Shad Khan links arms with players during the national anthem before the game. (Reuters)

Protests during the national anthem that began last season and flared to league-wide levels in the wake of President Trump’s condemnation have drawn widespread condemnation from fans. But even though the protests aren’t a criticism of the military—and are permitted by the NFL‘s teams and, despite the president’s call for firings, the First Amendment—one particular aspect of the protests fired up critics: teams taking a knee on foreign soil during the playing of the national anthem before London games. Critics charged that such a symbolic move was disrespectful to America’s military, and now, at least one team has taken those criticisms seriously.
The Jacksonville Jaguars have sent a letter to Bill Spann, director of Jacksonville’s military affairs and veterans department, apologizing for the team’s demonstration. The team, including owner Shad Khan, locked arms during the anthem, with several players kneeling.
Jaguars president Mark Lamping said the team was “remiss in not fully comprehending the effect of the national anthem demonstration on foreign soil has had on the men and women who have or continue to serve our country.”
Lamping added, “This was an oversight and certainly not intended to send a message that would disparage you, our flag or our nation.”
Jacksonville has a significant military presence, with this letter clearly aimed at bridging whatever rifts may have formed between the team and local military. “The notion never entered the minds of our players or anyone affiliated with the Jacksonville Jaguars, but today we can understand how the events in London on September 24 could have been viewed or misinterpreted,” Lamping wrote. “We owe you an apology and hope you will accept it.”
The Jaguars’ protest drew criticism from Jacksonville mayor Lenny Curry, who nonetheless understood the protesters’ right to speak up. “I stand and cover my heart for the pledge and the anthem,” Curry said in a statement immediately after the protests. “I think it’s stupid to do otherwise. The U.S. Constitution protects the right for a lot of people to do a lot of stupid things. I am a Constitutional Conservative, so I respect the wisdom of our Founders.”
Khan, along with most other NFL owners, is in New York this week for the fall owners’ meetings, and the protests during the anthem are a key point of discussion.
Posted by Unknown at 10:49:00 PM