Solange performs during the Okeechobee Music Festival on March 4, 2017 in Okeechobee, Fla

Day for Night Festival organizers announced the Houston arts and music festival's star-studded lineup Wednesday (Sept. 20), including Thom Yorke, Nine Inch Nails, St. Vincent, Solange, James Blake, and more.
Festival-goers will likely find themselves making tough decisions when choosing between sets to attend, with Pussy Riot, Princess Nokia, Cardi B and others filling out the lengthy roster.
Attendees also will have the chance to attend a summit on the intersections of art and activism, led by Chelsea Manning, Laurie Anderson, Nadya Tolokonnikova of Pussy Riot, and Lauren McCarthy. The panel will conclude with a separate special performance from Saint Heron featuring Solange, as well as Earl Sweatshirt and Kaytranada.
In addition to the packed musical lineup, the festival will host 18 art installations, with work from artists Ryoji Ikeda, Matthew Schreiber and more.
Omar Afra, executive producer and co-founder of Day for Night, says of the festival: "We couldn't be more excited to host this lineup of who we think are leaders in their disciplines of arts, music and ideas."
Afra spoke of plans to expand the festival in the next few years into a multi-venue five-day citywide event, explaining the importance of the city's ties to the arts.
"Houston has a long standing legacy of technology, art and culture, and we see Day for Night as a part of that story in the future," he said.

Day for Night will donate part of its proceeds to the Greater Houston Community Foundation as a show of solidarity with Houston and the victims of Hurricane Harvey.
Day for Night will take place Dec. 15-17 at Post HTX in Houston. See the full lineup below: 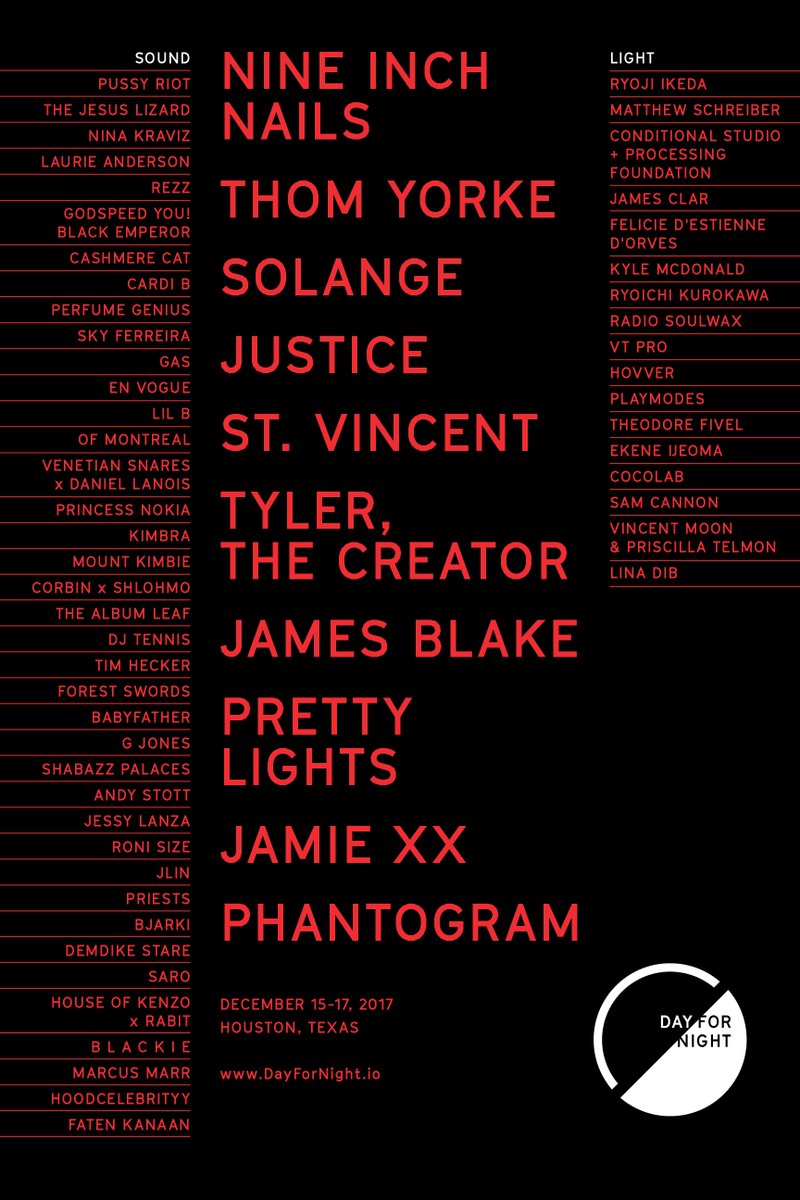