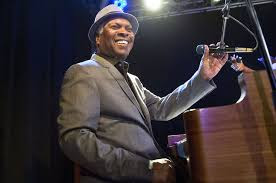 Some of the great original names of Stax Records are preparing for Friday night's (Sept. 1) celebration of the Memphis soul label's storied past at London's Royal Albert Hall. Stax Records: 50 Years of Soul is part of the 2017 BBC Proms season and will be broadcast live in the U.K. on BBC Four television and BBC Radio 3. It marks the 50th anniversary of the famed Stax/Volt tour, which took the U.K. and Europe by storm in 1967.

From that tour, Booker T. Jones, Steve Cropper, Eddie Floyd and Sam Moore are all taking part in tonight's concert, along with Stax labelmate William Bell. They'll be joined at the late-night event by some British artists who are all self-confessed devotees of the label: Sir Tom Jones, Beverley Knight, Ruby Turner and James Morrison. The concert takes place as Stax continues the year-long Stax 60 commemoration of the company's 1957 inception.

Cropper says that the reunion has reminded him of the great cameraderie that existed at Stax, which became a totem of racial integration when segregation was rife. “We're very fortunate to still be alive and to talk about it,” he muses. “It was a family at Stax. We were like brothers and sisters, and we worked together for the same purpose, to get hit records for everybody.”

Like Cropper, Jones still features many of Stax's trademark hits in his own live set, but he notes of tonight's set list: “The program is different. On my own show, I don't do Otis Redding's 'Hard To Handle' or the Arthur Conley song ['Sweet Soul Music']. I do some Stax songs, but they're mostly Booker T. and the MGs songs. So it's great to get to revisit [Carla Thomas'] 'B-A-B-Y' and [Eddie Floyd's] 'Knock On Wood,' and [William Bell's] 'I Forgot To Be Your Lover,' and to do them with Jools' ensemble is really nice. They're appropriate and respectful of the music."

“Based on rehearsals,” Jones continues, “it's just going to be great. It felt during the dress rehearsal like it's a new incarnation of the music, but it just feels great to play it and hear it, and be surrounded by that sound. Only Tom Jones could do 'Hard To Handle' the way he does, and he's been doing it for years. He's just a pro at doing an Otis song. And the new stars, Beverley and Ruby, they do such a great job of doing new versions of this timeless material.”

Bell, who wasn't on the 1967 tour but had his first British success the following year with “Tribute To A King” and the Judy Clay duet “Private Number,” adds: “We're doing a lot of the earlier Stax stuff, and mixing it all up with different players: Steve, Booker, Eddie, Sam Moore and then Tom Jones and different people are coming in.”

Deanie Parker, whose association with Stax goes back to 1963 and includes periods as an artist, songwriter and publicist, is travelling with the party. She recalls the impact that the 1967 tour made, not just on fans, but on the artists themselves. “They were shocked,” she says. “We had no way of knowing what the rest of the world knew about what we were doing in Memphis. So for them to have gotten a royal treatment when they landed here was just astounding.”

Floyd, who turned 80 in June, reveals that he has recently recorded an album with the Blues Brothers for October release, with Cropper among the contributors. He senses that interest in the Stax catalog is as strong today as it was 50 years ago. “The people were great here,” he enthuses, “and the music lives on.”
Posted by Unknown at 3:00:00 PM