Remember the "Go-Go's"? Where they are Today will Suprise You! 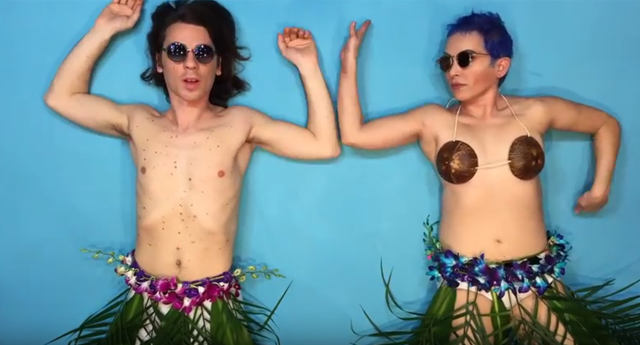 Ever since her early days in the pioneering new wave band the Go-Go’s, Jane Wiedlin has been fearless, expressing herself with no concerns about following the rules. After the Go-Go’s retired from touring last year, the 59-year-old pop/punk icon wasted no time in forming a new project, the indie-psych duo Elettrodomestico, with multi-instrumentalist Pietro Straccia — fearlessly showcasing a new sound (think Metric, Garbage, Phantogram) and rocking a bikini and bold cobalt hair in the new video “Aloha,” premiering on Yahoo Music today. (To watch the video click the Yahoo Music Link)

“I’m making some records just for fun, because I’ve been writing a lot this year. I moved to Hawaii [in 2015]. It made me feel very inspired. So I’ve been writing all these songs, and I didn’t know what to do with them. Then I thought, just make a record. It doesn’t matter if anyone hears it or not. Just make it. So that’s what I’m doing,” Wiedlin told Yahoo in an interview last year.
As for naysayers who’d argue that it is “age-inappropriate” for a fiftysomething woman to dye her hair Smurfette-blue, Wiedlin retorted, “F*** that. F*** that! I’m going do what I want. Actually, when you get older, it’s the perfect time to dye your hair, because your hair starts turning white, so you can just slap any color on it. You don’t even have to bleach it or anything! … Yeah, people think [I’m] old. Whatever. Guess what, everybody? Everyone’s gonna get old.”
Related: Margaret Cho opens up about how the Go-Go’s changed her life
Regarding the state of female pop stardom today, Wiedlin, who proudly wore baggy Goodwill and Salvation Army finds back in her punk-rock Go-Go’s days, remarked, “What I’m noticing right now is that a large percentage of the women performers that are out there, most of whom don’t seem to be musicians or songwriters, are manufactured and hyper-sexualized. I think most of them when they’re asked about it, say there’s now this pat answer: ‘I’m doing this, nobody’s making me doing this,’ and ‘I’m a feminist and I choose to be a feminist by dressing like a stripper’ or whatever. I don’t know, I find it a little bit difficult to look at, because it’s just so cliché and boring. But whatever. It’s not my career.”
While Wiedlin laments that the Go-Go’s didn’t open as many career doors as she’d hoped — “We had this assumption that everything was going to change, but everything didn’t change. … We thought that there would be hundreds of all-female bands playing their instruments and writing songs, and it just never really happened that way — or if they were out there, they didn’t seem to achieve the success we did” — she’s looking ahead with her exciting and thoroughly modern-sounding Elettrodomestico project. The duo’s debut album, If You’re a Boy or a Girl, comes out in October.
Posted by Unknown at 6:12:00 PM