BREAKING NEWS: Arian Grande, (A Pop Star), Concert Ends With an Explosion - At Least 19 people are Dead & About 59 People injured

The Latest on the Ariana Grande Concert Bombing in Manchester 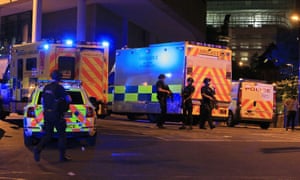 ■ Nineteen people were killed and around 59 others were injured in an explosion about 10:35 p.m. on Monday in the foyer outside the main hall of the Manchester Arena.
■ Prime Minister Theresa May said the police were treating the incident as “an appalling terrorist attack.”
■ The authorities suspect the blast came from either an abandoned backpack or a suicide bomber, a senior American intelligence official said. British officials said they were investigating reports that a suicide bomber detonated an improvised device containing nuts and bolts as shrapnel.
■ The explosion occurred just as a concert by the American pop star Ariana Grande was ending. Traumatized fans, including children, screamed and ran. Ms. Grande was not injured.
■ Parents separated from their children during the mayhem were told to go to nearby hotels, where many had taken refuge. Other children were being kept in the arena.
■ The police carried out a controlled explosion near the arena but later said the suspicious material was harmless. Bomb squads continued to comb through downtown Manchester.

‘Everyone Started Crying and Screaming’

Laura Bruce, 18, was with her sister Amy, 25, in one of the Arena’s upper tiers when they heard the explosion. “Everyone below us just turned and ran,” she said. “Because we were higher up, we could not get out for five minutes. When we came out, a man walked past us, just covered in blood.”
Sophie Tedd, 25, had traveled from Darlington to attend the concert with her friend, Jessica Holmes. At the end of the concert, they heard a loud bang, and initially wondered whether “a speaker had blown.”
“Then everyone started crying and screaming,” she said. “Everyone ran out. People were pushing each other out of the way. It took a couple of minutes to get out. The police were outside, telling us to keep running, to run away from Victoria station.”

Video from inside the arena showed the surreal scene of patrons scrambling for the exits, covered in pink balloons. The balloons were part of the choreographed staging for Ms. Grande’s tour, after a segment with projections and lasers.
— Rory Smith and Ben Sisario

The Terrorism Threat in Britain

The Manchester police are working on the assumption that the deadly explosion at a young people’s concert was an act of terrorism. If so, it would be the worst act of terrorism in Britain since the 2005 bombings of London’s buses and subway killed 52 people.

But British authorities, who have foiled numerous terrorist plots, will hardly be surprised. The threat level set by MI5, the domestic intelligence service has been set at “severe,” the second-highest level, for months now, meaning that they considered an attack “highly likely.” And counter-terrorism officials have been warning that as the Islamic State becomes under more and more military pressure in Iraq and Syria, it will try to strike out abroad.
-Steven Erlanger

Ariana Grande: ‘I Am So So Sorry. I Don’t Have Words.’

At one of the hospitals, the Manchester Royal Infirmary, anxious relatives, many in tears, showed up to check in with their loved ones. Outside the pediatric emergency department, a van carrying blood supplies pulled in behind an ambulance.
The injured were being treated at six hospitals, said Chief Constable Ian Hopkins of the Greater Manchester Police. The police set up an emergency number - 0161 856 9400 - “for those who are concerned about loved ones or anyone who may have been in the area,” the chief constable said.
— Sewell Chan

Witnesses said that the attack appeared to involve the use of a nail bomb. Nail bombs are used to magnify the destructive power of explosives, as the shrapnel increases the bomb’s ability to wound its victims. A nail bomb was believed to have been used Monday in an attack at a military hospital in Bangkok that wounded two dozen people.
Nail bombs use shrapnel like steel balls, razors, screws and other pieces of metal to enhance their destructive capacity. They were used in Britain by the Irish Republican Army in its campaign against the British government, including in a 1981 attack in central London that killed one women and injured 50 others.
— Gerry Mullany

Speculation that there might be another explosive device rose hours after the blast at deaths at the concert hall when the Manchester police said they had carried out “precautionary controlled explosion in Cathedral Garden.” It turned out to have been abandoned clothing, the police said, “not a suspicious item.”
— John Harney

Last week, the Islamic State released a 44-minute video featuring fighters of different nationalities, enjoining their supporters back home to carry out acts of violence. Among them was a man identified as a British national, according to a translation of the video provided by the Middle East Media Research Institute, which tracks jihadi propaganda.
Besides the threat last week, ISIS has repeatedly targeted the U.K. in its propaganda, though with little effect until earlier this year.
— Rukmini Callimachi

Arena Largest Such Venue in Britain

The Manchester Arena is one of the world’s busiest areas, and the largest indoor venue in Britain with a capacity of 21,000, or 18,000 for concerts. It was constructed as part of Manchester’s bid to host the Olympic games in 1996 and 2000, and is connected to the Manchester Victoria Station, which was closed due to the attack.
The Arena opened in 1995 and has hosted some of the world’s leading musical acts, including The Rolling Stones, U2, Madonna and Luciano Pavarotti. It also hosted the 2002 Commonweath Games.
— Gerry Mullany

Rail service at Manchester Victoria, a major transportation hub in the city, was suspended late Monday night and will remain closed on Tuesday. Manchester’s light rail service, Metrolink, has also been suspended at the station.

Manchester Victoria, which was used by more than 7 million passengers in 2015-16, is one of the busiest rail stations in England.
— Matthew Haag

The Pennsylvania-based company SMG manages the Manchester Arena, and Wes Westley, the president and CEO of the company, described the precautions at the venue.
“It is obviously as tight security as anywhere in the states,” he said in an interview. “Backpacks are not allowed. Drinks are taken away from people. You have to go through very strict security to enter the arena.”
He explained that attendees arrive through a large public foyer, which is where the explosion occurred. The area, which connects to the Manchester Victoria rail station, is where parents often wait for their children after the concerts.
The incident “occurred in a public space outside of Manchester Arena,” the company said.
— Ben Sisario

Intelligence officials in the United States were briefed on the Manchester explosion late Monday and were told it appeared to be a terror attack, said one senior official who was not authorized to discuss the situation publicly and spoke on condition of anonymity.
The Department of Homeland Security said it was monitoring the situation and it had “no information to indicate a specific credible threat involving music venues in the United States” while warning Americans in Manchester to be vigilant.
“U.S. citizens in the area should heed direction from local authorities and maintain security awareness,” the department said in a statement. “We encourage any affected U.S. citizens who need assistance to contact the U.S. Embassy in London and follow Department of State guidance.”
— Adam Goldman and Gerry Mullany
Posted by Unknown at 12:57:00 AM