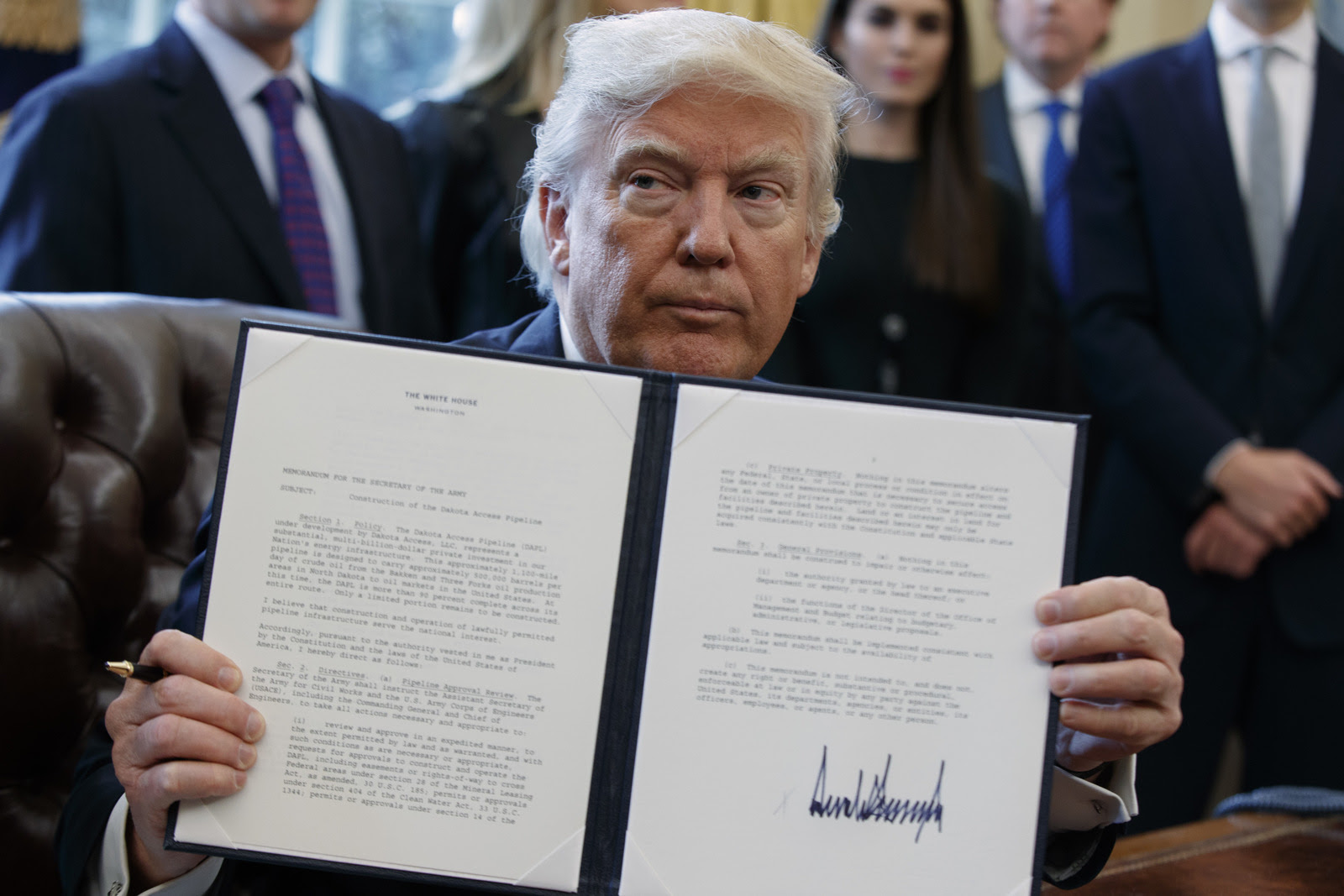 WASHINGTON, March 6 (Reuters) - President Donald Trump signed a revised executive order on Monday banning citizens from six Muslim-majority nations from traveling to the United States but removing Iraq from the list, after his controversial first attempt was blocked in the courts.
The new order, which the White House said Trump had signed, keeps a 90-day ban on travel to the United States by citizens of Iran, Libya, Syria, Somalia, Sudan and Yemen.
White House spokeswoman Sarah Huckabee Sanders said the new order would take effect on March 16. The delay aims to limit the disruption created by the original Jan. 27 order before a U.S. judge suspended it on Feb. 3.
RELATED: Protests erupt across US after Trump's initial immigration ban

Trump, who first proposed a temporary travel ban on Muslims during his presidential campaign last year, had said his original executive order was a national security measure meant to head off attacks by Islamist militants. It came only a week after Trump was inaugurated, and it sparked chaos and protests at airports, as well as a wave of criticism from targeted countries, Western allies and some of America's leading corporations.
"It is the president's solemn duty to protect the American people," Secretary of State Rex Tillerson told reporters after Trump signed the new order. "As threats to our security continue to evolve and change, common sense dictates that we continually re-evaluate and reassess the systems we rely upon to protect our country."
The leader of the minority Democrats in the Senate, Chuck Schumer, said he expected the revised order to have the same uphill battle in the courts as the original version.
SEE ALSO: Rep. Jason Chaffetz sees no evidence of Trump's Obama wiretap claim
"A watered down ban is still a ban," he said in a statement. "Despite the administration's changes, this dangerous executive order makes us less safe, not more, it is mean-spirited, and un-American. It must be repealed."
IRAQ'S NEW VETTING
Iraq was taken off the banned list because the Iraqi government has imposed new vetting procedures, such as heightened visa screening and data sharing, and because of its work with the United States in countering Islamic State militants, a senior White House official said.
Thousands of Iraqis have fought alongside U.S. troops for years or worked as translators since the U.S.-led invasion in 2003. Many have resettled in the United States after being threatened for working with U.S. troops.
Trump's first order was seen by opponents as discrimination against Muslims but the White House official said the new order was based on national security concerns and had nothing to do with religion.
"It is substantially different from the first order yet it will do the same thing in this important way: It will protect the country and keep us safe," the official said. The administration would reset the clock on the 90-day travel ban.

The White House official said the new executive order also ensures that tens of thousands of legal permanent residents in the United States - or green card holders - from the listed countries would not be affected by the travel ban.
Trump's original travel ban resulted in more than two dozen lawsuits in U.S. courts. The state of Washington succeeded in having it suspended by the 9th Circuit court of Appeals by arguing that it violated constitutional protections against religious discrimination.
The original order barred travelers from the seven nations from entering for 90 days and all refugees for 120 days. Refugees from Syria were to be banned indefinitely but under the new order they are not given separate treatment.

"NO ALLEGED CHAOS"
Trump publicly criticized judges who ruled against him and vowed to fight the case in the Supreme Court, but then decided to draw up a new order with changes aimed at making it easier to defend in the courts.
Refugees who are "in transit" and already have been approved would be able to travel to the United States.
"There's going to be a very orderly process," a senior official from the Department of Homeland Security said. "You should not see any chaos so to speak, or alleged chaos at airports. There aren't going to be folks stopped tonight from coming into the country because of this executive order."

The FBI is investigating 300 people admitted into the United States as refugees as part of 1,000 counter-terrorism probes involving Islamic State or individuals inspired by the militant group, congressional sources told Reuters on Monday, citing senior administration officials.
An FBI spokeswoman said the agency was consulting its data to confirm the information.
The White House official said U.S. government agencies would determine whether Syria or other nations had made sufficient security improvements to be taken back into the refugee admissions program.

The new order launches a 90-day period for the Department of Homeland Security (DHS) to define a new series of requirements for countries to have full participation in U.S. entry programs.
For countries that do not comply, the U.S. State Department, the DHS and intelligence agencies can make recommendations on what, if any, restrictions should be imposed.

"It's not an all-or-nothing scenario," the official said.
The new order spells out detailed categories of people eligible to enter the United States, such as for business or medical travel, or people with family connections or who support the United States.
"There are a lot of explicit carve-outs for waivers and given on a case-by-case basis," the official said.
Posted by Unknown at 2:26:00 PM