The twin pillars of Daytona: A racetrack and a bikini bar 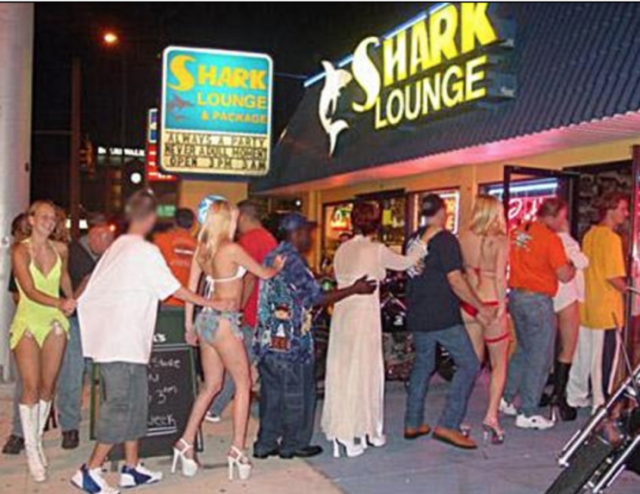 DAYTONA BEACH, Fla. — For four decades they stood as sort of twin pillars of Daytona culture, perhaps unequal in frame and fame, yet connected in so many ways. If nothing else, each provided a uniquely Daytona experience.
On one end of International Speedway Boulevard, on the edge of town near the interstate, is the hulking Daytona International Speedway, the corporate and spiritual home of NASCAR and the host, Sunday, of the 59th Daytona 500.
Six miles east sat the humble, often outlandish and eventually disreputable Shark Lounge and Package, equal parts aquatic-themed bikini bar and discount liquor store. Perched prominently on the corner of International Speedway and A1A, down by the beach in the heart of the city’s hell-raising entertainment district, it signaled a visitor had truly arrived in Daytona.
One remains a point of pride for city leaders and the reason some 100,000 fans will descend here this weekend. The other represented everything else, at least until it bottomed out after a series of ownership changes causing the police chief to deem it a “den of iniquity” and pushing hard for its shuttering.
It worked. The Shark Lounge closed in 2016 and because of criminal activity that eventually overwhelmed the place, that’s for the better. The memory of its less scandalous, yet still fun, days lingers on, though, in the mind of old drivers and crew chiefs and fans even as the Great American Race prepares to go on without it.
This is Daytona, not Disney. This is a party town. And since 1975 the Shark Lounge drew in more than its share of customers who arrived for recurring, but decidedly non-family events, ranging from college spring breaks, Harley-fueled bike weeks and all those rowdy races. That doesn’t even count the churn of students at two local universities or the local denizens of this blue-collar town.
The initial concept was simple: a dive bar with a small liquor/convenience store attached to it. In typical Daytona fashion, girls dancing in bikinis were added to draw in young male customers. The place sold booze, beach bodies and T-shirts all at once. Amongst the Mt. Rushmore of Daytona commerce, the only thing missing was live bait.
While it eventually became sad and seedy, in its heyday it was part of the tourist tableau, tucked next to a scooter rental shop, across the street from a beach supply shop and just two blocks from the hotel where NASCAR was founded in 1948.
And yes, it was a racing bar.
“I had most of the big, big names in NASCAR come in through the years,” said Dominique DeLannoy, a native of France who along with his brother Didier, opened the bar in 1975. “The drivers, the crew, everyone would come in. In 1981, Stock Car Magazine wrote a story on where to stay, eat and play in Daytona and we got picked as the [place to] ‘play.’ ”
Through the years the DeLannoys were involved in many local sports businesses, including owning the local minor league baseball team. In this case, they also began sponsoring cars at the local Volusia and New Smyrna racetracks.
They even hatched the idea of taping races and then showing them on a big screen inside the Shark, drawing the drivers, crew and so on in for a few beers and a chance to watch what happened.
“They were good customers so I gave back a little,” DeLonney said.

For eight glorious years in the late 1990s and 2000s, the Shark Lounge even sponsored a car in the local ARCA race, a minor league level of NASCAR that raced around Daytona International Speedway. It also raced three times at Talladega Superspeedway in Alabama. It was one of the more unlikely, if hysterical sponsorship deals in the sport’s history.
“It was,” the car’s owner, Ralph Solhem, told Yahoo Sports this week. “They liked the exposure, but also to have the car parked in front of the Shark. It drew people in. I started bringing two cars and just parking one on the sidewalk and racing the other.”
That was when, they say, the Shark Lounge was more of a traditional neighborhood bar, albeit one with dancing girls. Nudity was not allowed, though. It was a different era at Daytona, when race weeks went on literally for weeks and the lower-profile nature of the sport meant it wasn’t unlikely to see drivers, team owners, crew-members and fans mingling at bars along A1A.
“We used to have a big party,” said Richard Childress, speaking generally of that era in Daytona and not any one place in particular. He’s been in NASCAR as a driver or team owner since 1969. “It’s totally different then from what it is today. You didn’t have the media you have now. You didn’t have the scheduling. You had more time to get out, so that was a big thing.
“We’d go all over the place,” Childress continued. “Sometimes we’d just go to the beach and hang out.”
The Shark Lounge was a natural because it was directly down the street from the track, there was usually a car parked out front and the walls were full of pictures of race cars with the Shark logo on them. Plus, its glowing Shark sign at the T where International Speedway Blvd. dead ends at the beach served as an impossible-to-ignore beacon.
“A lot of guys would come from up north to Daytona and they’d want to howl,” Solhem said.
Eventually, though, the DeLannoy’s sold the place. Then the next owners did the same and the Shark Lounge began a descent. Year after year fresh faces arrived for the annual party weeks and the bar struggled to maintain a grip.
Soon authorities charged that things often went beyond the bounds of good taste and local ordinances. In 2012, police staged a lengthy investigation named “Operation Chum Bucket” (seriously) to bust the joint. A sting operation yielded 20 separate sales of illegal narcotics, two propositions for prostitution and the arrest of a man caught standing near the stage and, well, getting too familiar with himself.
“It hasn’t been cleaned in over a thousand years,” Daytona Beach police chief Mike Chitwood colorfully declared at the time. “It’s skanky. It’s filthy. If I was a roach, I wouldn’t live inside.”
The descent had been swift.
Solhem said when he first raced at Daytona with the Shark Lounge painted on the side there were some jokes and laughs but an appreciation for the support. It was a legitimate place, especially by Daytona standards. Besides, finding money to keep these cars going is tough, and while the money from the Shark wasn’t significant, every dollar helped.
A few years later, Solhem called Daytona looking for an official photo a different sponsor wanted to use for marketing purposes.
Suddenly the track didn’t want a photo with the Shark Lounge painted on a car getting out there at all. “They asked me, ‘Are you aware there was a murder there?’ ” Solhem recalled.
Then again, there was the time that NASCAR tried to centralize its sponsorship department and based it out of an office on Madison Avenue in Manhattan. One day the Shark Lounge, appearing on a list somewhere, got a cold call pitching them on a major, multi-million dollar Cup-level deal. That was, to say the least, a little out of the Shark’s budget.
Solhem and others feel bad the old bar broke so bad. Losing a landmark, even one that walked the line of decency, is never fun. Mark Lane, the columnist at the Daytona Beach News-Journal, declared its closing as a “Daytona Moment” while noting that people from all over the country wanted to buy the old, glowing sign.
“An iconic sign at a gateway intersection,” Lane wrote.
Lane also retold the time the police were called after an aquarium broke due to a girl dancing on top of it. The cops were needed to help rescue the small sharks and fish that flooded across the floor. With the Shark Lounge, it was always something.
Perhaps because of its long run as a police headache, or perhaps because of its prominent location, the city worked to get the Shark Lounge closed. Fading NASCAR memories aside – including its bold run as an actual car sponsor – it wasn’t worth the headache.
Which isn’t to say this is some typical gentrification story.
The building has certainly been remodeled and spruced up. It’s less of an eyesore now, but not with much of a change of heart.
Out went the discount liquor store/bikini bar. In its place? Candy, A Gentlemen’s Club.
Because in the end, Daytona is always going to Daytona.
Posted by Unknown at 4:16:00 AM