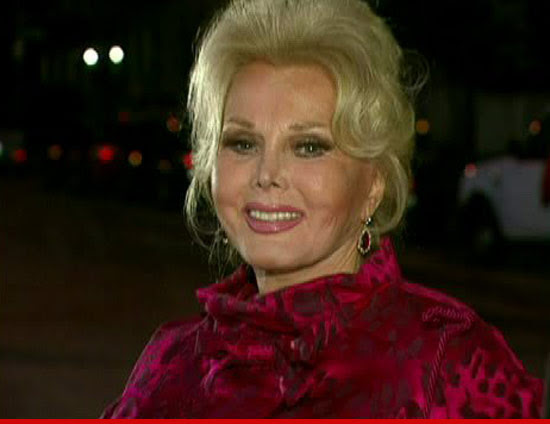 Zsa Zsa Gabor, whose 60-year career of playing herself helped paved the way for today's celebrity-obsessed culture, has died. She was 99.
Publicist Ed Lozzi confirmed to Variety that Gabor died Sunday in her Bel Air mansion. She had been on life support for the last five years, and according to TMZ, which first reported the news, she died of a heart attack.
While Gabor had multiple acting credits, her greatest performance was playing herself: She was famous for her accented English (calling everyone "darling," which came out "dah-link"), eccentric name, offscreen antics (including a 1989 incident in which she slapped a Beverly Hills cop) and one-liners about her jewels, nine marriages and ex-husbands. Despite her glamorous image, her life, especially in later years, was marred by battles between her much-younger husband Frederic Prinz von Anhalt and her daughter.

The actress was frequently in the news in recent years as her health deteriorated. She broke her hip in July 2010 in a fall in her Bel-Air home after a 2002 car accident had left her wheelchair-bound and a massive stroke further hobbled her in 2005. Her leg was later amputated above the knee. Yet Gabor stubbornly clung to life.
Both of Gabor's sisters predeceased her: Eva Gabor in 1995, Magda in 1997.
Gabor appeared in films including "Moulin Rouge," 1953's "Lili," Orson Welles' "Touch of Evil" and the 1958 camp classic "Queen of Outer Space."
Born in Budapest, Zsa Zsa (born Sari) Gabor was crowned Miss Hungary in 1936 and followed her sister Eva to Hollywood. She got her foot in the showbiz door with MGM's 1952 "Lovely to Look At" and got a bigger break that year with "Moulin Rouge," directed by John Huston, who is said to have given the ingenue, who spoke heavily accented English and had almost no film experience, a difficult time during the shoot. Gabor's English improved, but her Eastern European roots became part of her trademark.

On TV, she appeared on "The Red Skelton Hour," "Playhouse 90" and "Matinee Theater." She was featured in a 1960 TV adaptation of "Ninotchka" and guested on series including "Bonanza," "Batman" (as the villainess Minerva) and "The Facts of Life." She even appeared on the soap "As the World Turns" in 1981.
Her theater credits include "Forty Carats" on Broadway and a touring production of Noel Coward's "Blithe Spirit."
Hollywood didn't take her too seriously as an actress, maybe because she didn't take herself too seriously. She seemed to have decided that there were few roles as interesting as her own persona. With her emphasis on showcasing her own glamour and sparking outrage, it's no surprise that her showbiz work consisted mostly of playing herself in dozens of films and TV series.
Her rise to fame coincided with the spurt of talk shows that filled the airwaves during the early days of TV. The early '50s created other talkshow and gameshow celebrities, but few parlayed that fame much beyond the 1950s. Gabor's attitude —" I deserve attention not because of any talent, but just because of who I am" — was an early example of a phenomenon that has ballooned in the past decade, as tabloids put reality-TV figures on their covers and blogs cover them incessantly.
A third sister, Magda, and their mother, Jolie, also received attention from the media, but not as much as the other two. And while Eva Gabor eventually landed a role with which the public could identify her — as Lisa Douglas on the 1960s sitcom "Green Acres" — Zsa Zsa was simply "famous for being famous," as someone quipped decades ago.
Many of Gabor's most well-known ripostes came at her own expense and highlighted her predilection for marrying wealthy men. Some of the most notable were "I want a man who's kind and understanding. Is that too much to ask of a millionaire?"; "A man in love is incomplete until he has married. Then he's finished"; "Getting divorced just because you don't love a man is almost as silly as getting married just because you do"; and, after describing herself as a great housekeeper, she added, "Every time I divorce a man, I keep the house."
She had a daughter, Francesca, during her 1942-46 marriage to hotel magnate Conrad Hilton, though Hilton reportedly believed Francesca was not his biological daughter, and the millionaire left her just $100,000 in his will. After spending much of her life contesting Hilton's will, Francesca Hilton died destitute on Jan. 6, 2015. Gabor, meanwhile, was the great-great aunt of Paris Hilton.
Other husbands included actor George Sanders (1949-54) and Jack Ryan (1975-76), who is credited with designing the Barbie doll for Mattel. Her marriage to actor and attorney Felipe de Alba was annulled in 1983 after a single day because her marriage to Michael O'Hara, her divorce lawyer in her breakup with Ryan, had not been properly dissolved.
In 1986, at age 69, she married Prinz von Anhalt, some 30 years her junior. He was accused by her daughter of keeping her away from her mother, and it is doubtful Gabor knew of her daughter's death.
Her 1989 run-in with a Beverly Hills police officer, whom she famously slapped during a traffic stop, was explored in 1991 documentary "The People vs. Zsa Zsa Gabor," and mocked, frequently by a willing Gabor herself, in movies from "Naked Gun 2½" to "A Very Brady Sequel" and series including "The Fresh Prince of Bel-Air."
Gabor was also said to have indirectly lost millions to swindler Bernie Madoff.
Zsa Zsa's survivors include her husband.
Posted by Unknown at 11:13:00 PM