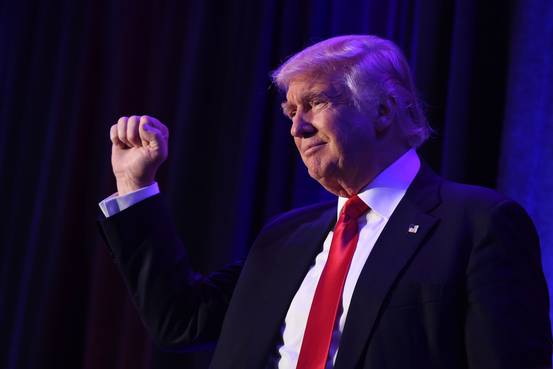 Trump Says Clinton Called to Congratulate Him, Praises Her for 'Hard-Fought Campaign'

Mr. Trump is now on stage, greeted by chants of "USA! USA!"
"Sorry to keep you waiting -- complicated business," Mr. Trump said.
"I just received a call from Secretary Clinton," Mr. Trump opened. "She congratulated us -- this is about us -- on our victory, and I congratulated her and her family on a very, very hard-fought campaign. She fought very hard."
The Clinton campaign confirmed she called Mr. Trump to concede.

Mike Pence Takes the Stage: 'The American People Have Elected Their New Champion'

The vice president elect said, "This is a historic night."
"America has elected a new president," he continued, "and it's almost hard for me to express the honor that my family and I feel that we will have the privilege to serve as your vice president."
He said he was "humbled" by tonight's events.

Mr. Trump started off on a gracious note, saying of Mrs. Clinton, "We owe her a major debt of gratitude for her service to our country." He called for the country to unite and heal the "wounds of division."
Echoing a line often used by Mrs. Clinton on the campaign trail, Mr. Trump said, "I pledge to every citizen of our land that I will be president for all Americans, and this is so important to me."
Mr. Trump, who has in the past threatened to punish his critics, said he was seeking to appeal even to those who hadn't supported him.
"For those of you who have chosen not to support me in the past, of which there were a few people, I am reaching out to you for your guidance and your help so we can work together and unify our great country," he said."
Posted by Unknown at 3:10:00 AM