(Read all about Eydie Gormé after the videos) 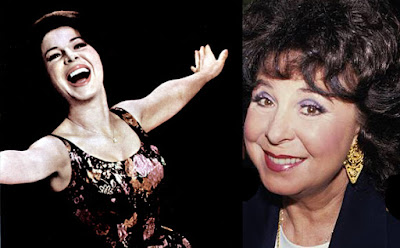 Eydie Gormé (also spelled Gorme;[2] August 16, 1928 – August 10, 2013) was an American singer who performed solo as well as with her husband, Steve Lawrence, in popular ballads and swing. She earned numerous awards, including a Grammy and an Emmy. After retiring in 2009, she died in 2013, and is survived by Lawrence, who continues to perform as a solo act.

Gormé was born Edith Gorme[3] (her obituary said Edith Gormezano,[1] and census sources indicate Edith Garmezano) on August 16, 1928, in Manhattan, the daughter of Nessim and Fortuna, Sephardic Jewish immigrants. Her father, a tailor, was from Sicily and her mother was from Turkey. Gormé was a cousin of singer-songwriter Neil Sedaka.[4][5]
She graduated from William Howard Taft High School in 1946 with Stanley Kubrick in her class. She worked for the United Nations as an interpreter, using her fluency in the Ladino and Spanish languages, while singing in Ken Greenglass's band during the weekends.[citation needed]

She got her big break and her recording debut in 1950 with the Tommy Tucker Orchestra and Don Brown. She made a second recording which featured Dick Noel. MGM issued these two recordings on 78.
Gormé worked in Tex Beneke's band. In 1951 she made several radio recordings that have been reissued on vinyl LP and recently on CD. In 1952 Gormé went on to record solo, and her first recordings were issued on the Coral label. During this time, she was featured on the radio program "Cita Con Eydie" ("A Date with Eydie"). She changed her name from Edith to Edie but later changed it to Eydie because people constantly mispronounced Edie as Eddie. Gorme also considered changing her family name; however, her mother protested, "It's bad enough that you're in show business. How will the neighbors know if you're ever a success?"[6]

In 1953, Gormé made her first television appearance, and met her future husband, singer Steve Lawrence, when they were booked for the original The Tonight Show, hosted by Steve Allen.[8]
In 1958, they starred together in The Steve Lawrence-Eydie Gorme Show, a summer replacement for The Steve Allen Show. During the 1970s, the two made guest appearances on The Tonight Show Starring Johnny Carson, either with Eydie appearing as the guest and going into her song and Steve suddenly coming out from backstage and joining her or the other way around.[citation needed]

Gormé and Lawrence were married in Las Vegas on December 29, 1957. They became famous on stage for their banter, which usually involved tart yet affectionate, and sometimes bawdy, references to their married life, which remained a feature of their live act.

Eydie Gormé enjoyed hit singles of her own, none selling bigger than 1963's "Blame It on the Bossa Nova", which was also her final foray into the Top 40 pop charts. It sold over one million copies and was awarded a gold disc.[9] In the UK, "Yes, My Darling Daughter" reached #10.[10] She won a Grammy Award for Best Female Vocal Performance in 1967, for her version of "If He Walked Into My Life", from Mame. The latter made #5 on the Billboard magazine Easy Listening chart in 1966, despite failing to make the Billboard Hot 100. Many of Gormé's singles chart success from 1963 onward were on the Easy Listening/Adult Contemporary charts, where she placed 27 singles (both solo and with her husband) from 1963 to 1979 (of which "If He Walked Into My Life" was the most successful). As a soloist, her other biggest hits during that period included "What Did I Have That I Don't Have?" from On a Clear Day You Can See Forever (#17 Easy Listening, 1966) and "Tonight I'll Say a Prayer" (#45 Pop and #8 Easy Listening, 1969, also her last Hot 100 entry as a solo artist).[citation needed]
Steve and Eydie: As a duo with her husband, the act was billed as Steve and Eydie. They began their careers as members of the cast of the Steve Allen original Tonight Show. On February 8, 1960 they were awarded a star for recording on the Hollywood Walk of Fame at 1541 Vine Street.[11] Also in 1960, Steve and Eydie were awarded the Grammy Award for Best Performance by a Vocal Group for the album "We Got Us". Their biggest hit single as a duo, "I Just Want to Stay Here", was written by Gerry Goffin and Carole King and reached #28 in 1963. Under the pseudonym "Parker and Penny", Lawrence and Gormé achieved their last chart single (#46 on the Adult Contemporary chart) with a cover of the 1979 Eurovision song contest winner, "Hallelujah". The song most closely identified with the duo, the Steve Allen composition "This Could Be the Start of Something", never reached the charts, though it remained a staple in their live act.[citation needed]
Gormé and Lawrence appeared numerous times on TV, including 13 appearances on The Carol Burnett Show, as well as The Nanny. She and Lawrence starred together on Broadway in the musical Golden Rainbow. After the 1970s, the couple focused strictly on the American pop repertoire, recording several albums themed around individual American pop composers.[12]

Eydie gained crossover success in the Latin music market and internationally through a series of albums she made in Spanish with the famed Trio Los Panchos. Eydie’s first recording with Los Panchos came about after the popular group from Mexico, then composed of Alfredo Gil, Chucho Navarro y Johnny Albino, saw her perform at Manhattan’s Club Copacabana late in 1963. The chanteuse had just achieved international fame with Blame it on Bossa Nova, which sold 250,000 copies in Spanish in addition to the English sales. Los Panchos were the top bolero singers in Latin America at the time, so when the Mexican stars suggested a recording, Columbia supported the idea and soon the 12 songs were selected and recorded.[13]
In 1964, the label released the album, Amor, which spent 22 weeks on the charts.[14] One of the songs, Sabor a Mí, became closely identified with Gormé and emerged as one of her signature tunes. An early video of her rendition of this classic exists here.[15] The disc was later reissued 18 times, with various names including as Eydie Gormé Canta en Español con el Trio Los Panchos;[16] it remains the top-performing album in her oeuvre on iTunes. In 1965, a sequel appeared called More Amor (later reissued as Cuatro Vidas). Her last album with Los Panchos was a 1966 Christmas collection, Navidad Means Christmas, later reissued as Blanca Navidad. Gormé also recorded other Spanish albums in her career, including the Grammy-nominated La Gormé (1976), a contemporary outing. The 1977 release Muy Amigos/Close Friends, a duet collection with Puerto Rican singer Danny Rivera, also received a Grammy nomination.[17]

In 1995, Steve and Eydie were inducted into the Songwriters Hall of Fame, winning the Sammy Cahn Lifetime Achievement Award. It is worth quoting from that award:[18]

Steve and Eydie's television specials saluting the great American songwriters are considered primers of quality, style and showmanship. The critically-acclaimed Steve and Eydie Celebrate Irving Berlin, received seven Emmy Awards. Their tribute to George and Ira Gershwin, Our Love is Here to Stay, garnered two more Emmys and From This Moment On, their musical salute to Cole Porter, won the duo an Award of Excellence from The Film Advisory Board. A highlight of Steve and Eydie's career was their "Diamond Jubilee World Tour" with Frank Sinatra. Playing to SRO audiences around the world and winning rave reviews, the one-year tour culminated in New York's Madison Square Garden. Frank Sinatra says, "Steve and Eydie represent all that is good about performers and the interpretation of a song..they're the best."

She was also awarded Society of Singers Lifetime Achievement Award in 1995.[19]
As the 21st century arrived, the couple announced their plans to cut back on their touring, launching a "One More For The Road" tour in 2002. In 2006, Gormé became a blogger, posting occasional messages on her official website. In November 2009, after his wife retired, Lawrence embarked on a solo musical tour.[20]

Gormé and Lawrence had two sons together. David Nessim Lawrence (b. 1960) is an ASCAP Award-winning composer who composed the score for High School Musical. Michael Robert Lawrence (1962-1986) died suddenly at the age of 23 from ventricular fibrillation resulting from an undiagnosed heart condition.[21] Michael was an assistant editor for a television show and was apparently healthy despite a previous diagnosis of slight arrhythmia.
Gormé and Lawrence were in Atlanta, Georgia, at the time of Michael's death, having performed at the Fox Theater the night before. Upon learning of the tragedy, family friend Frank Sinatra sent his private plane to fly the couple to New York to meet David, who was attending school at the time. Following their son's death, Gormé and Lawrence took a year off before touring again.[21]

Gormé died on August 10, 2013, six days before her 85th birthday, at Sunrise Hospital & Medical Center in Las Vegas following a brief, undisclosed illness. Her husband, Steve Lawrence, was at her bedside, along with their surviving son, David.[22] She is also survived by her granddaughter. She was interred at Hillside Memorial Park in Los Angeles, California.[23]
Following his wife's death, Lawrence issued a statement in which he paid tribute to her. "Eydie has been my partner on stage and in my life for more than 55 years. I fell in love with her the moment I saw her and even more the first time I heard her sing. While my personal loss is unimaginable, the world has lost one of the greatest pop vocalists of all time."[6]
Posted by Unknown at 11:46:00 PM